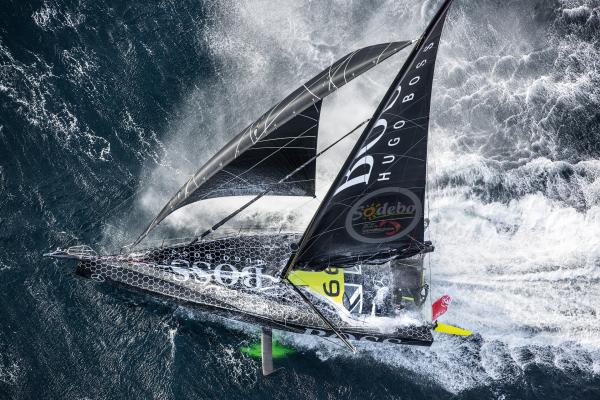 What a sailor, what a race. In the fastest Vendee Globe in history, after 74 days at sea Alex Thomson on Hugo Boss has taken out second place, gaining a coveted podium space and finishing just 16 hours behind race winner Armel Le Cléac’h on Banque Populaire. This is Thomson’s second consecutive podium finish in the Vendee Globe, considered the toughest sailing race on earth, after finishing third in the 2012-2013 edition.

Doyle Sails is extremely proud of their involvement in Thomson’s campaign as sail supplier to Hugo Boss. “We have lived and breathed every minute of this race and we think Alex has done an incredible job,” says Mike Sanderson, CEO of Doyle Sails New Zealand. “We’re so proud of what Alex has done in so many ways and are pleased to have played our part in helping him achieve this amazing result.”

Arriving into Les Sables-d’Olonne after completing the race in 74 days 19 hours 35 minutes and 15 seconds, Thomson provided a nailbiting race throughout with highs and lows and first place all to play for right until the final stages. Having lead the race for most of the early stages Thomson suffered a huge blow when he damaged his starboard foil on the 19 November 2016, limiting the boat’s performance when on the port tack and costing him an approximate 20% of the boat’s speed. Despite this setback he continued to push, keeping constant pressure on Le Cléac’h until the very end, maintaining a formidable drag race over the final week and finishing just hours apart – an incredible feat in a race spanning over two months at sea.

During his 74-day race Thomson broke a number of significant records along the way including the world record for greatest distance sailed solo in 24 hours, with an average speed of 22.4knots, made all the more impressive as this record was set in the final few days of the race. Thomson also set two new race records in one day, for the fastest time to reach the Cape of Good Hope, completing this stretch in 17 days 22 hours and 58 minutes (5 days and 48 minutes faster than the previous record) and for the fastest time from the Equator to the Cape of Good Hope, passing in 8 days, 15 hours and 56 minutes (previous record 12 days, 2 hours and 40 minutes). Thomson is now also the fastest Briton to circumnavigate the globe on a monohull, beating his own record set in 2012/2013.

Throughout the race Thomson has paid tribute to his sail inventory, citing it as a key influence to his performance during the circumnavigation and one of his main advantages over the other competitors. “Aside from our foils the one place where we are completely different to the other IMOCA 60’s is our sails, which obviously play a huge part in this race,” says Thomson. “The Stratis product lends itself brilliantly and I would be very surprised if anyone has anything as light and as durable as we have; if you want something different, something fast, if you want an edge, it is best not follow the crowd.”

Hugo Boss carries a full suit of Doyle Stratis ICE sails as part of a long term relationship between Doyle Sails New Zealand and Alex Thomson Racing. Thomson and his team worked closely over several years with Richard Bouzaid, Head of Design at Doyle Sails New Zealand, to develop the inventory carried by Hugo Boss. Doyle’s involvement included extensive sail design team input during the design phase of both the boat and aero package as well as significant on-the-ground support during the construction and sail trial phase of Hugo Boss, and Thomson believes the time invested has paid significant dividends in the result of the race. “The sail plan that Richard developed for us has made a big difference and is the reason I was able to stay at the front of this race with the others after we lost the foil, says Thomson. “I appreciate all the work the team has done; Richard cares, he seriously cares, about this campaign and he put a lot of his time and effort into it and we wouldn’t be where we are without him.”

“It’s hard to say enough really of what Alex – and all the sailors in this race – have achieved; it’s been a privilege to work with him and his team over these two race cycles and I’m excited for the future,” says Bouzaid. “After careful consideration of the new IMOCA 60 rule we developed a different sail combination than presumed, different to the other teams, and that in combination with the whole approach we’ve taken together over the last eight years, has helped achieve this great result. The cool thing is that this is just the beginning.”

As well as the sail configuration itself Thomson is full of praise for the durability and reliability of his Doyle sails. “In terms of performance, even after nearly 75 days at sea in these hugely challenging conditions my sails are still like they are brand new,” he says “The reliability of the product is just brilliant and I think that’s where Doyle really are different to everyone else and it’s a big reason why we choose to work with Doyle – it’s the service, product and the relationships and the fact the team really cares and brings significant added value to the campaign.”

With the first of the competitors now safely back in port the race continues. Hungarian sailor Nandor Fa on Spirit of Hungary, also powered by a Doyle STRATIS inventory, is currently lying in eighth place, over 500nm ahead of his nearest rival, in another testament to the durability and performance of a Doyle inventory. “We’re so pleased to have worked with both Alex and Nandor and hope to keep showing that when it comes to high performance sails there is an alternative choice,” says Sanderson.