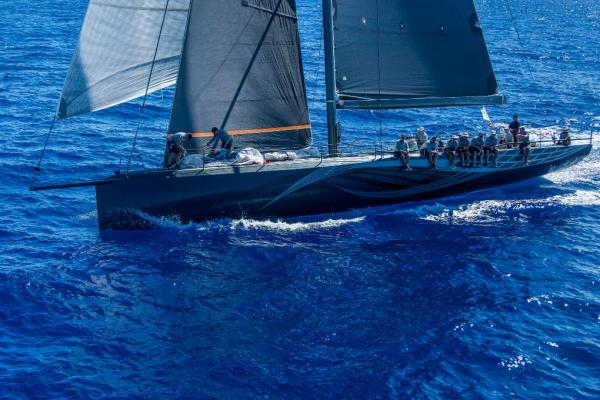 For the fourth year in a row the RORC Caribbean 600 has been taken out by a Stratis-powered yacht; further confirmation that Stratis is the sail membrane of choice for any serious performance yacht. Bella Mente claimed first place overall with fellow Stratis client Proteus in close second. Both yachts were in good company at the head of the fleet with Leopard 3, also using Stratis sails,putting in an impressive performance to finish second place on the water and third in her class.

In what was “a 600-mile match race,” as described by Mike Sanderson, CEO of Doyle Sails New Zealand, Hap Fauth’s Bella Mente and George Sakellaris’ Proteus battled it out over the duration of the course with the lead changing at no less than seven points during the race. In true demonstration of how close the race was Bella Mente crossed the line just 14 minutes ahead of Proteus, taking out the win for the best time under IRC. “It was a brutal but really great race… physically and mentally tough with only a few ‘power naps’ to survive on,” reports Sanderson, who was racing on board Bella Mente. “We are very proud of another huge win for the Stratis product, this is now the fourth RORC Caribbean 600 in a row that has been won by a boat ‘powered by Stratis’ so this result is an incredible achievement for our team.”

Sanderson was not the only Doyle team member racing, with Richard Bouzaid and Stu Bannatyne of Doyle Sails NZ and Robbie Doyle racing on board Proteus. “For Proteus this race really is the reason that George [Sakellaris] loves this sport and why we all do it,” says Bouzaid. “It was a really tough race, where for two days the teams drove so hard and just kept pushing… we did over 60 sail changes and while we didn’t quite get the result we were hoping for Bella pushed just as hard and got their reward. This will definitely be one to look back on with pride knowing we finished with nothing left in the tanks.”

This close battle between Bella Mente and Proteus was reminiscent of the 2016 edition of the race, won by Proteus, which also saw these two boats fighting each other for the lead before Bella Mente was forced to withdraw with a broken keel. Previous results in this popular race were a win for Bella Mente in 2015 and for Shockwave in 2014, demonstrating long term success for Stratis customers.

Doyle Sails New Zealand has invested heavily into the development of its Stratis performance sails range, as well as building an expert team to provide a full range of support for its customers. The results of this investment speak for themselves with recent podium results counting Alex Thomson’s incredible Vendee Globe campaign, with the Briton taking second place, Stratis-powered 72’s taking out every Maxi 72 event in 2016 including Bella Mente and Proteus’ first and second place at the 2016 maxi worlds, and Rio 100’s record race and win in the Pacific Cup. Recent new performance sail inventories include commissions from the Beau Geste 80, Chinese Whisper, and the Pack 52 Invisible Hand, 100ft supermaxi Scallywag.

Congratulations go to all competitors in the RORC Caribbean 600. Doyle Sails New Zealand is very proud to be involved in so many exciting racing programmes and look forward to continuing to work with our growing list of clientele and partnering with them to deliver long term results and exciting racing.