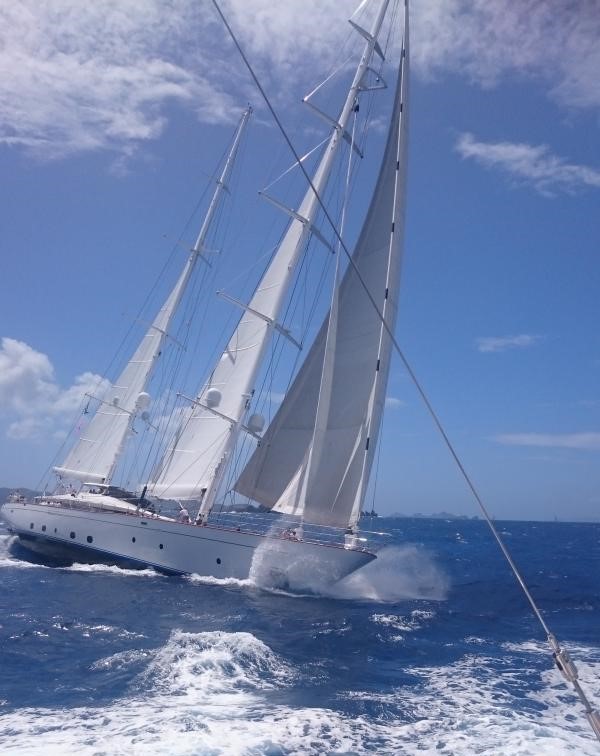 Doyle sails have taken over the racing scene during this Caribbean season with top podium finishes in both the Loro Piana Superyacht Regatta and the St. Barths Bucket Regatta. We are proud to have had so many Doyle sails participate in both races with such outstanding results.

The 7th annual Loro Piana Caribbean Superyacht Regatta & Rendevous consisted of 17 boats circumnavigating around Virgin Gorda in the British Virgin Islands over a 3 day race period. The last day of the race brought on swift winds of 13 to 20 knots blowing the yachts around a 23 nautical mile course. Quality sailing made for a thrilling competition and there were a couple of close calls.

The 38m Perini P2 was neck and neck with Ganesha for the final stretch, but came out with a 1st place win overall in Class B.

In Class D the 60m superyacht Perseus ^3 earned her 1st place victory by swooping into the lead after having some issues with it’s rolling furling system that prevented the crew from using the headsail for half of the race. Perseus^3 took the cake by a mere 45 seconds.

The 2017 St. Barths Bucket was no different in terms of Doyle sails dominating the over the water. The reliably stunning Caribbean weather provided the perfect conditions with an average of 15-20 knots of breeze. The race brought out 38 superyachts which were divided into six classes that sailed over the course of a 3 day period in “pursuit style.”

In Class B we had the 34m Sojana come out with 2nd place and 37m Axia in Class C. Perini Navi’s 56m Rosehearty shined through taking 1st place in Class D despite having blown their A3 spinnaker earlier in the week. Perseus^3 wasn’t far behind them, however, they broke their spinnaker on the downwind run to the finish and placed 3rd. Lastly, the 43m Vitters sloop, KOO, took home the 1st place trophy in the new Corinthian Class.

As you can see, Doyle sails’ presence was very much alive and well this Caribbean season. It’s becoming more and more obvious that there is a common denominator for the world’s top performing sail yachts.