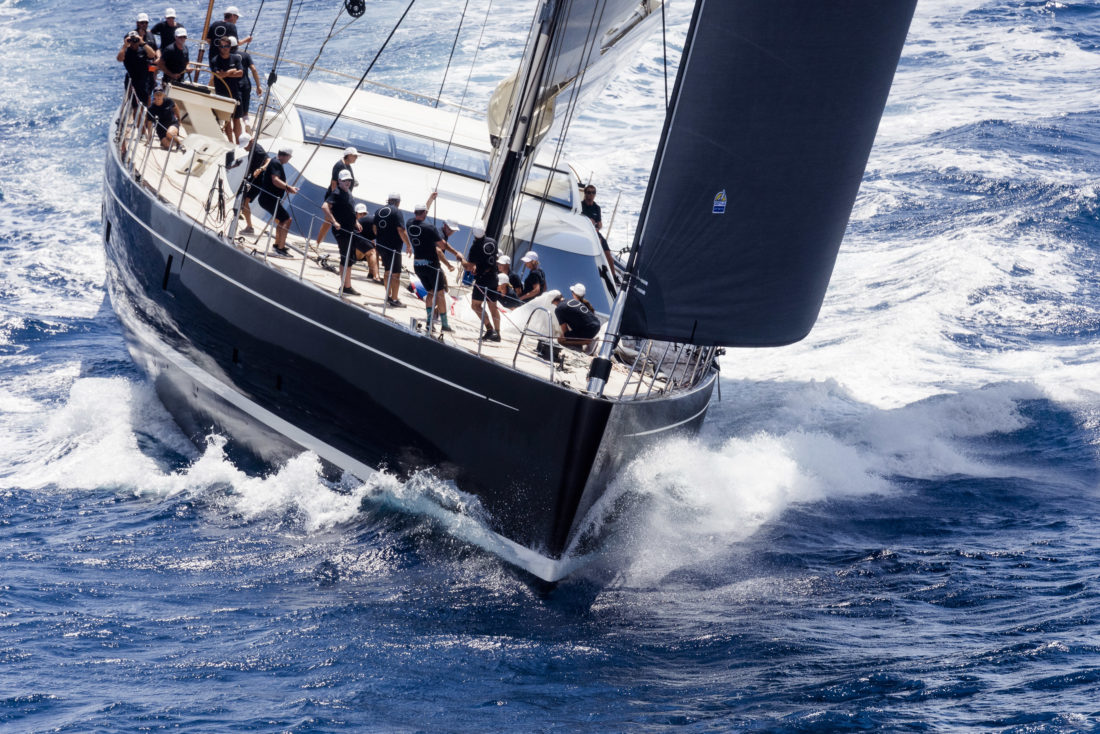 St. Barthelemy island hosted the St. Barths Bucket Regata, from 21-24 of March 2019. It was impressive the Doyle superyacht clients performance this year with big wins in five of the six pursuit classes that saw 34 yachts and over 1,500 sailors compete.

“We have been following Ohana since 2009, and after ten years we found our best result. The sails chosen and the great cooperation between every singol team member has allowed us to win. The name “Ohana” means “Family” as Doyle Sails wants.”

Les Gazelles des Mers the 66-metre Baltic-Dykstra Hetairos which carries a partial Doyle Sails inventory took out the win in the six-yacht class as well as winning the overall honours and coveted Bucket Trophy. Doyle New Zealand’s Superyacht Coordinator Matt Bridge and Doyle Palma’s Grand Prix Coordinator Luke Molloy were members of a forty-something crew. Matt Bridge credits their win to race preparation, “The six days of practice we had prior to the race and meticulous boat preparation by the crew made for a faultless performance.”

The two boats – both with 100 per cent Doyle sail inventories – started the final day tied on points, and both crews were looking for win.

Doyle Sails Newport Tony Rey comments on the race as crew on Rosehearty, “Racing a 500 ton ship around the islands of St Barths is like racing a school bus on a motocross track. It can be done, but it’s not easy. The secret is in pushing the needle to the redline, but not blowing anything up. We had 15+ knots in all three races, and the big Perini handled the conditions beautifully.

Paul Cayard from the bridgedeck and the Captain Dave Hutchinson are the reason why Rosehearty won.

Perseus strategist Robbie Doyle comments on the sailing and competition, “Sailing was sensational. We won the first race where we were able to carry the world’s largest sail (A2) on the longest leg of the race. After getting a third on the very challenging, many short legged Wiggly course, we went into the third and final race tied for first with the 56m ketch, ‘Rosehearty’, and the 47m sloop Hyperion.

On the final race we had a bit fresher breeze that we thought would favor us. We got hit with a 30 knot rain squall which added a bit of excitement to the race. We sailed extremely well, but ‘Rosehearty’ sailed flawlessly and won. ‘Hyperion’ blew out her jib and thus was not in contention.”

Downwind trimmer and first-time crew Tac Boston offers his thoughts, “It was my first superyacht regatta and the whole experience was unreal. The boat had not raced in two years and the team stepped on and did not miss a beat. We had four days of practice beforehand and we were able to iron out the kinks. We had a gear upwind that no other boat in our class could touch. Sailing with Robbie and Phil Maxwell from Doyle was a great experience and their input into trim was essential.”

Les Mademoiselles del Mers the 44.7-metre Vitters-Dubois Ningaloo placed sixth in the class. Head of tactics Chris Nicholson of Doyle Sails Lake Macquarie comments, “It is a privileged position to be in when you get to sail on a superyacht and I had a fantastic time with a great crew on ‘Ningaloo’. It was great to experience to showcase some of the amazing yachts Doyle is involved with.”

Les Femmes des Mers the 34-metre Alloy-Ron Holland Blue Too had a most impressive and consistent performance winning their class with three bullets by the largest cumulative margin ever recorded in the Bucket’s history. Doyle Sails Midwest‘s Managing Director John Baxter who has been with the yacht since 2011 organised the sail inventory, race program and crew for their sixth Bucket Regatta. Over the years Blue Too has always had a high level of success coming very close each time to the class win.

John Baxter comments on the performance,“Richard Bouzaid did an incredible job this year and I’m pretty sure we pulled the string tighter than anybody around the islands and that was the key to our success, in addition to a fantastic race crew that is relatively unchanged for the last 5 years.”