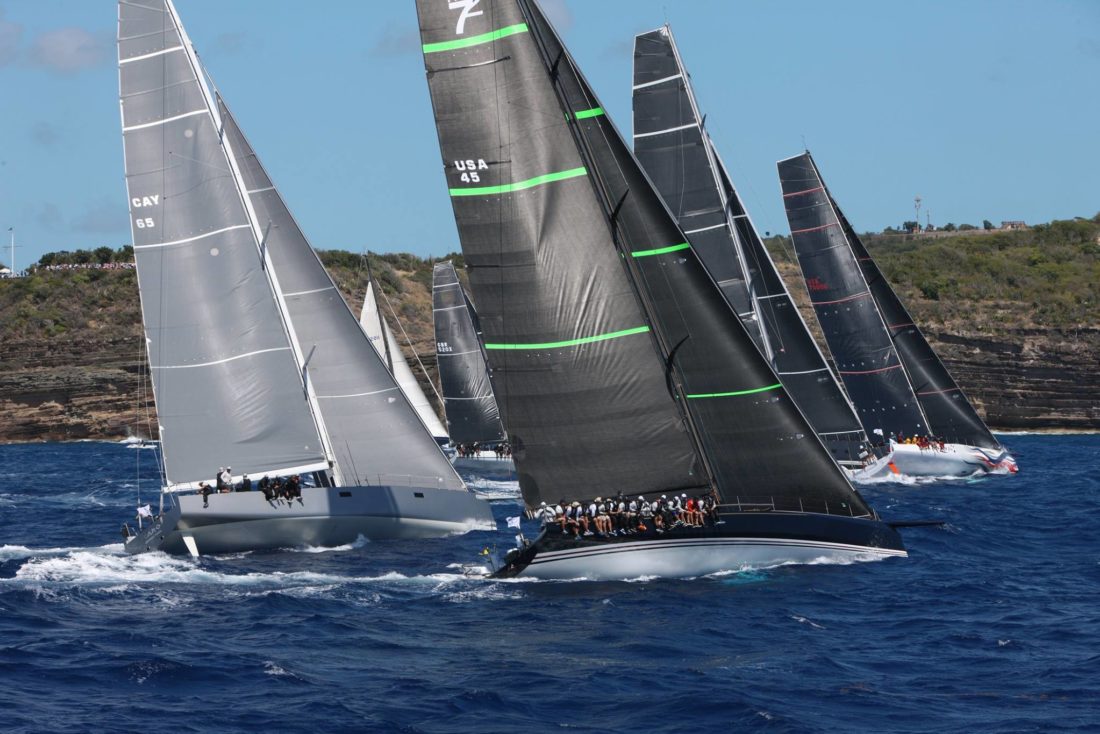 The 2019 Royal Ocean Racing Club’s Caribbean 600 has come the 11th editione. This event brought out more than 700 sailors from 21 different countries to sail in one of the toughest and fastest 600’s we’ve seen yet.

Mike Sanderson on Maxi 72 Bella Mente, Justin Ferris on Botin 65 Caro, Tony Rey on Sorceress and Stu Bannatyne on Marten 49 Summer Storm, some of team members Doyle that have attended.

Botin 65 Caro was predicted to be in the top three of the IRC rating and put in an impressive performance to finish third place on the water and 2nd her class until rig damage forced them to retire 55 miles upwind of Antigua. Caro crew member and Doyle Grand Prix sail designer and expert Justin Ferris comments on the damage and their performance prior to the breakage.

“The backstay was tearing its way down the topmast, so we were unable to sail. Before this, Caro was going very well and having a great battle with the VOR 65 “Sailing Poland” (ex mapfre), we seemed to have their number once we were able to get onto the Cable-less Fro, but we were a lot faster VMG downwind, not really a surprise here. Upwind and tight reaching they were just a click faster. At the time that we pulled out we were sitting in 3rd overall (IRC). Disappointing but not the end of the world as we had had some great sailing and fast rides and we still have a mast to be able to continue with our Caribbean season. Next up for Caro is Les Voile de St Barth in April.”

“Conditions were favorable for our Swan 66 with a lot of reaching in the 600 mile course. We blew out our running and reaching chutes within 15 minutes one-third into the race (operator errors gybing in 20+ kts in big seas). Then had to use the code 0 at less than ideal angles for the race, but luckily for only 50 miles or so. Made up the lost time with good upwind and reaching performance vs the class. Crew stayed focused and positive throughout, a testimony to the character of those assembled by Pete Todd and led by Mike Joubert.

We had added a Genoa staysail this year and used it to great advantage, helping to keep the bow down in beam reaching conditions during the prevailing 20 kts. The main looks great after three years of an admittedly relatively “light” racing schedule and the jib, which is a bit more “mature” held up in trying conditions.”

When Bounty crew arrived, at 5:30am, they have toasted with colicili. d Carib beer and a few Guinness. The crew will be ready for the next big race in June for the Swan North American Regatta in Newport.

Congratulations go to all competitors in the RORC Caribbean 600. Doyle is extremely proud to be involved in so many exciting racing programmes and look forward to continuing to work with our growing list of clientele and partnering with them to deliver long-term results and competitive racing.