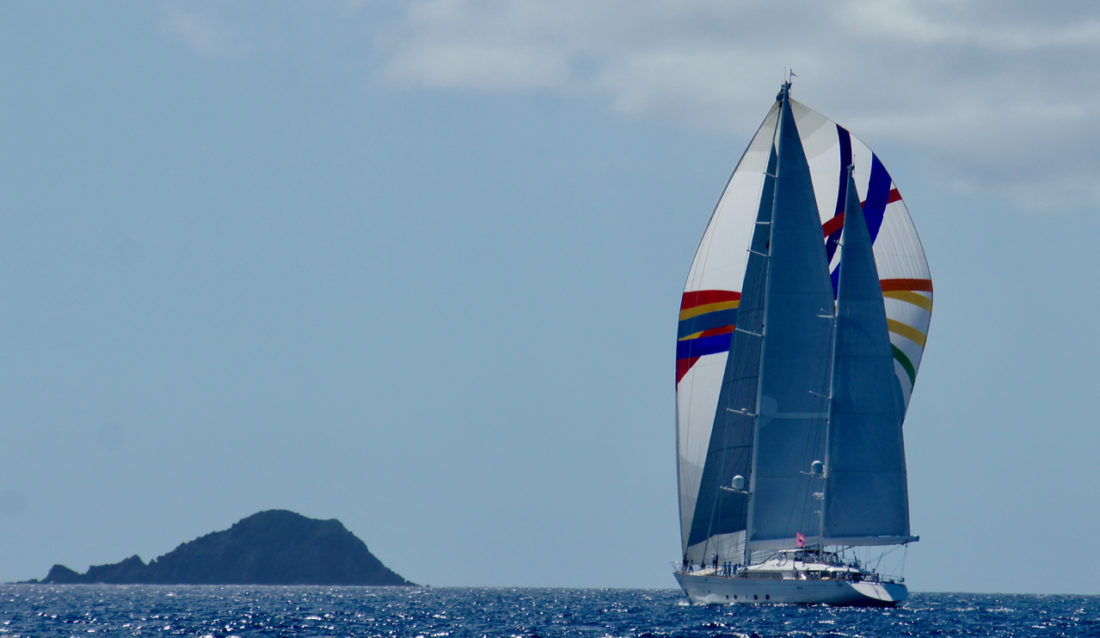 Tony Rey, the representative Doyle Sails on board, said: “It was dynamite!” describing the Rosehearty crew’s thoroughly enjoyable day on the water.

“We had 14 to 16 knots of wind all around the “not so wiggly” course. We had three hoists and two drops on the kite: we had the A3, then the A2, then the A3 again – so we had all the fruit in the air at some point. Than, It was beautiful seeing 50 people which helped to pulling the kites down and than we won the race.”

Saint Barths Bucket is a tipical kind of competition which uses a pursuit-style format with the fastest boats in each class starting last to avoid busy start lines and the incumbent the danger of collisions between the superyachts.

Rosehearty started third but soon, more or less halfway through the race, it went ahead.

“Once we got ahead we were focused on not letting the chasing boats catch us,” Rey explained. “Our tactician Paul Cayard did a great job for us as did our navigator Bruno Zirilli. It was 20 minutes of nervousness but happily we were able to do it.”

Rosehearty’s win today along with a third place in Race 1 yesterday sees her top Class E – Les Grandes Dames des Mers, with one final race of the regatta to be sailed tomorrow (Sunday March 24).

The American boat goes into the final day in a three-way tie with the winner of yesterday’s opening race ‘Perseus 3’ – a 60-metre (197-foot) Perini Navi, also using Doyle sails – and the 48-metre Royal Huisman ‘Hyperion’, all on four points.

“So we have to wait until tomorrow to see the final race,” Rey commented. “That’s a great way to end any regatta.”

A second place today in Class C – Les Elegantes des Mers for the 100 per cent Doyle-inventoried 56-metre (184-foot) Royal Huisman ‘Aquarius’ sees her in second place in the class but tied on points with the class leader, the impeccably-sailed J-Class ‘Velsheda’.

Meanwhile, in Class F – Les Voiles Blanche (White Sails) another Doyle boat, ‘Ohana’ tops the rankings after winning both races in the regatta so far.

Racing at the 2019 Saint Barths Bucket comes to a close tomorrow Sunday March 24 with the third and final race scheduled to start at 1130 local time.