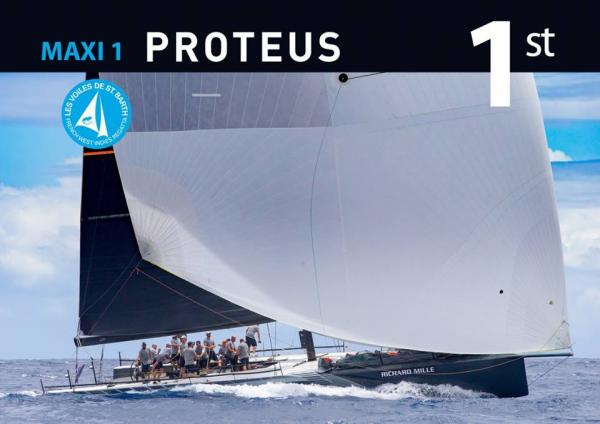 Long time Doyle customer Proteus continues her winning form with yet another regatta win, taking out the Maxi 1 class at the Les Voiles de St Barth 2016, held off St Barths from 11-16 April 2016. Despite slightly challenging conditions with limited wind, battling it out with rival Momo made for some exciting racing.

Stu Bannatyne, Grand Prix Race Sales & Projects at Doyle Sails New Zealand, was racing on board and reports back from the event:

“Trade winds disappeared from the Caribbean for the event and we lost one day due to no wind. The other three race days were raced in 4-10 knots, with winds very shifty and variable especially on the last day.  We were able to have a couple of great training days in moderate breeze tuning up with Momo prior to the regatta. The first race was won by Momo and we were in second place. The second race was the reverse with a downwind start, where we got a nice break and opened a pretty big lead early on, finishing just ahead of Momo. The third and final race was similar to first only lighter and around the Island.  Momowon the pin and extended, we had a good start near the pin but slipped back on the first leg struggling to find good lanes among the other big boats and the many smaller boats that started ahead of us.  We snagged a lobster pot around the top of the island and fell further back but managed to close a bit in the second half although they still had a handy lead when they parked in a hole near the finish.  We found a small vein of breeze to sail around them and crossed the line ahead by a few hundred metres.”

Owner George Sakellaris was pleased with the win, thanking the crew for always pushing on the race course and continuing to work hard on the sail and boat developments.

This win follows Proteus’ win at the 2016 Caribbean RORC 600. Next up in the Maxi 72 racing calendar is racing in Newport in June 2016, followed by the Newport Bermuda Race.