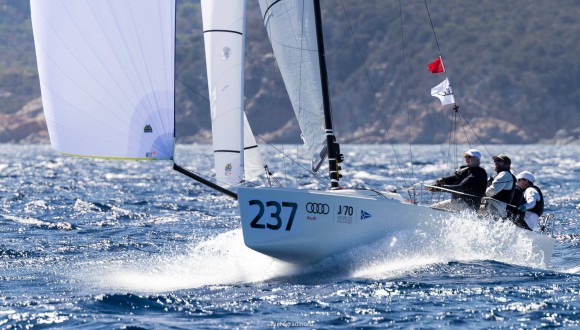 The 2017 J/70 World Championship was one the largest and most competitive One Design regattas of the year, with 161 boats racing haling from 24 different countries.  With many of the top sailors in the world competing, the racing was incredibly close throughout the regatta hosted by the Yacht Club Costa Smeralda in Porto Cervo, Sardinia.  After the racing had concluded, it was American Peter Duncan, sailing with Doyle’s own Jud Smith, Victor Diaz de Leon and Willem van Waay, that came away with the victory. Over the course of six races, the team never placed worst than third and won three races, finishing with a 15 point margin over runner-up Brian Keane (USA).

“Awesome! Top of the world!” exclaimed Peter Duncan dockside at the Yacht Club Costa Smeralda. “It is a great feeling, I have sailed with some great guys, we had a great event, and everything seemed to go our way, it was just one of those weeks. It is hard to put into words how I feel like now, but this was just exceptional. This fleet has some really great talent, and the organizers, and the yacht club have done such an amazing job. Most of all I want to credit the crew, Victor, Jud, Willem, have been just fantastic.”

With numerous General Recalls, Black Flag in play, and a full on foam up. The Audi J/70 World Championship had a thrilling climax to remember for years to come. With sparkling sunshine, a significant sea state, and a warm westerly breeze, piping up to a ballistic 30 knots, the world’s largest championship sportsboat fleet enjoyed a fantastic finale.

The team on Relative Obscurity has sailed together for most of 2017, and worked hard in preparation earlier this year.  In 2017, the team has won the J/70 Italian Nationals, Newport Regatta, and Bacardi Miami Sailing Week, in addition to taking third at the J/70 European Championships.  Jud Smith, head of Doyle One Design, has been intimately involved with the team, and for the World’s the team was using Doyle latest J/70 Class Sails: M2 Cross Cut Main, J6R Bi-Radial Jib and AP Class Spinnaker.